Kicking it at the BK Lounge

Last Sunday E was at the sketchiest Burger King in the city, which, naturally, is located right across the street from the library. A seedy looking man leaned in the door and called to his lady, who was standing next to the food pickup station, clutching a grimy receipt.

“Oh, honey,” he said in the stilted, carefully enunciated words of a bad liar, "We're going to be late for…church, so you better just get a refund for our meal. We cannot wait any longer.”

She shuffled over to the cash register and asked for a refund.

The manager gave her the once over. “Ma'am, this food was purchased for you two, not by you two. I will only give a cash refund to the person who bought the food for you.”

Obviously some misguided Samaritan had bought them a meal in lieu of a cash handout, which of course they had absolutely no interest in, since you can’t trade street drugs for a flame broiled Whopper. After a lot of righteous indignation, she gave up and skulked out. She and her life partner then walked off down the street, bickering, I'm sure, over which one had failed in his oer her part of their sad little grift. Sebastian and Michelle ride again!

This city spends a staggering 80K on services per homeless person. They are not going hungry, believe me, despite the gauntlet of increasingly aggressive cant one has to face coming to and fro the library. Sorry that I sound so jaded, but cash handouts do nothing but fuel addiction and support an underground economy of drugs that is ruinous to the quality of life for all involved. One of my fedup colleagues will scream at people, primarily tourists, that she sees handing out money to panhandlers around the library, “Enablers! Quit ruining my city!”

We're going to have our own Easter egg hunt in the stacks of the the library today and by "Easter eggs" I mean human feces.

David Sedaris did a hilarious segment on This American Life about this phenomenon, although he focuses mostly on the goings on at large retail chains. His theory is that it is an acting out, a fecal uprising, against faceles corporatation, like throwing a rock through a Starbucks window at a G-8 demonstration. He became intrigued after his boyfriend mentioned offhandedly one day that when he worked at The Gap customers would often use the dressing rooms as bathrooms, even though there were bathrooms located conveniently throughout the mall where this Gap was. Sedaris, furious that Hugh withheld such fascinating material from him, embarks on his own informal research project about these incidences by polling everyone he meets who worked at a store if this had ever happened. My favorite reponse was from an elderly woman he just met who had worked at Target. She grasped his hands and gave him a deep, haunted look.

"Why, however did you know?"

She reported employees would find poo all over Target, but the most popular place was in the interior of the circular clothing racks. I suppose humans are no better than caged monkeys, flinging our poo as an act of defiance and rage. As thoroughly revolting as that is, I was relieved to know that the public library is not an isolated target of this sort of bio-vandalism. 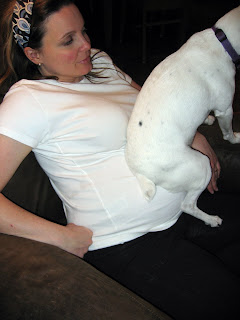 Or puts the unborn in its place. Although this cannot be comfortable for Billy, and it certainly is not for me, my ever expanding abdomen has become his new favorite perch. I suspect he senses that there's a rival in there who must be told his place in the pack. Or perhaps he is trying to help me incubate it in his own special way.

According to the Dog Wheeesperer, some of the ways dogs exert dominance are to sit upon, lean against or place a body part upon whomever/whatever they're trying dominate. Because Billy is the most nervous and insecure alpha ever, he cannot be direct about it and has to stealth dominate. Whenever we have guests over Billy will sidle up next to the "intruder," curl up, feign sleep, stretch and then subtly but deliberately place a paw on them. In his little dog mind, hiearchy has been established. and he is now the boss of them.

This does not bode well.

During my last hour on the desk some workmen were jackhammering stonework that had become a tripping hazard not 20 feet away. The noise was deafening and made meaningful reference work or even conversation impossible. As frustrating and nerve rattling as the conditions were, I was reminded of my all time favorite Snopes entry.

Supposedly babies in utero will begin to squirm and kick when mothers even THINK about lighting up.

A word from Spoon

I am completely disgusted. Your pregnancy is ridiculously long and the results unimpressively small. I myself gestated a brood of six puppies in just 63 days. By the time you reached your fourth month I had my puppies whelped, weaned and sold off to good homes for a tidy profit. I also had my figure back.
// posted by Foxy @ 1:18 PM (0) comments

This fills me with dread

Here is a photograph that really showcases the infamous Key head. Doesn't it make you wince? I imagine my poor, dear great-grandmother is gazing down upon her baby (either my grandmother or great-aunt) in disbelief that she survived childbirth. Such an immense, disproportionate head doesn’t even seem evolutionarily possible.
Has it really been over a month since I posted last? This pregnancy has made me completely good for nothing. At least the constant, gnawing queasiness has ceased. It's hard to believe that not too long ago a woman's entire adult life was a continuous cycle of birthing, nursing and child rearing. You see how many might find death a welcome relief.
// posted by Foxy @ 7:34 PM (1) comments