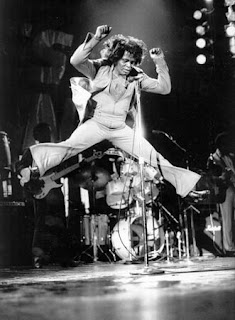 I have so many tales of patron exploits to report but stringing all of these stories into coherent sentences just makes…me…so…tired.

Here's one that has being making me laugh for a couple of days. A patron was sleeping the sleep of the dead at one of the CD listening stations in the audiovisual room, a long string of saliva petrifying between his lower lip and the counter. When a staff person gently approached to wake him the patron jerked awake, full body convulsed a couple of times, sending a stack of CDs flying everywhere. His eyes rolled wildly around and he blurted, “GOT ANY JAMES BROWN?”

To me, one of the most stressful and dreaded duties at the security staff-less branches was enforcing the no sleeping policy. Dozing patrons were only to be approached with the most extreme caution – I once saw one lunge and take a groggy swing at a librarian who tried to wake him up. No matter how gently you tried to awake them their reactions were completely unpredictable and usually terrifying. I understand why - many of the sleeping patrons are 'in between places' and I would be touchy, too, if I had just been released from prison or were living on the streets and had people constantly trying to prey on you when you were at your most vulnerable, asleep. But, as much as I feel for their plight we can’t have the libraries looking like the Ft Worth or Dallas Greyhound bus stations that my brother and I would spend a good part of our Sundays in when we were children being shuttled between our divorced parents. The stations had rows of snoring homeless sleeping it off in front of the little black and white individual TV sets that cost a quarter for 15 minutes of grainy pictures with rolling static lines and sobbing runaways on the pay phones. Every time I looked around I saw a small child getting smacked by his or her parent. God those places were grim.

// posted by Foxy @ 2:59 PM
Comments:
Beautifully described and yes, grim. I once took the hound from Nashville to Dallas, 24 hours of my life I'll never have back. The only seat left was next to a young woman, easily 400 lbs, with a newborn baby asleep on her ample bosom. The baby looked like a dot on a sea of skin and fabric, it's 6 fingers on each hand (!) slowly kneading.